The video art and photography of Victoria Fu examines and plays with artistic conventions and the dispersal of technical images in the contemporary era.

A talk and reception was held Thursday, Jan. 17 from 5-7 p.m. in the University Art Gallery. 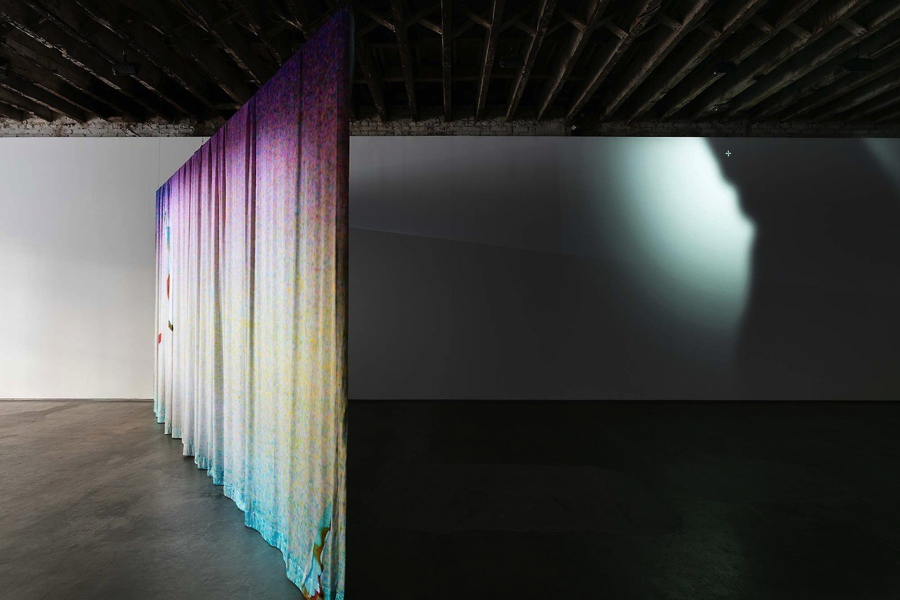 Télévoix is a group of artworks about the shadows of images, the emptiness and mystery that poses--thinking about the presence, thickness and material of images, whose pixels have none of those things. The exhibition consists of a video on a monitor, a projected video of fake shadows, an image-based sculpture in a corner, and a large double-sided curtain.

Images were generated by shooting 16mm film footage of celestial and spectral desktop screensavers, and also of the actual sky at different times of day/night. During the shooting, the negative was sometimes exposed to light to achieve chance film flares and flashes in the footage. The negatives were then hand-processed with hairs, dirt, objects, etc., that scratched the emulsion for maximum texture and painterly effect.

In the studio, I shot video of many still life setups that involved hands and green materials in order to composite them. In the editing room, I combined the still life videos with the original16mm footage as well as clips sourced from the internet--and composed onto the same cinematic plane. In addition, a computer program imagined and extruded a 3D form of one of the artifacts (as a result of hand processing) in a film still. I included some of these animations of navigating through the abstract space of the touchscreen. This piece results in Télévoix, the titular video that is shown on a large flatscreen monitor in the back.

A large hanging curtain takes a still from the 16mm film, and the backside of the curtain depicts what the 3D computer program extruded as its implied backside. Another projected video imagines what the cast shadow of the curtain's images might look like, along with other shapes and forms, including shadows cast by the my body in the projector's light. Finally, a sculpture in the shape of an image projected into the corner employs surfaces of digitally-printed images, combining a handmade wood object with a depth-less image space.

The title, Télévoix, is a poetic reference to a game of telephone playing out with voices, something both intimate and distant with loss of information each subsequent iteration. It suggests something also completely automated or non-human, which is a loose reference to the question of the indexical loss of the image.

VICTORIA FU (b. Santa Monica, California, USA) is a visual artist who received her MFA from CalArts, MA in Art History/Museum Studies from University of Southern California, and BA from Stanford University. She attended the Whitney Independent Study Program and was in residence at Skowhegan. Fu has received grants from Art Matters and the Harpo Foundation, and is a 2015 Guggenheim Fellow. Her artwork is included in the collections of the Whitney Museum of American Art in New York, NY; Pérez Art Museum, Miami, FL; Los Angeles County Museum of Art, Los Angeles, CA; MIT List Visual Arts Center, Cambridge, MA. Fu is represented by Simon Preston Gallery and Honor Fraser. She lives and works in San Diego, where she is Associate Professor of Art at University of San Diego, and maintains a studio in Los Angeles.